I’ve been having a lot of trouble getting to sleep lately.

I go to bed cuz it feels like it’s time. Sometimes my body won’t settle, itching and twitching and such like. Sometimes my mind won’t. Usually it’s a mixture of both. So I get back up. But then I’m tired as hell, and it seems like I’m sleepy again, so I go back. Rinse, lather, repeat 3-5 times.

Eventually one of two things happen. Either I finally manage to pass out, or I get up and move out to the deck and sleep on the couch. Sleeping on the couch by myself seems to help. 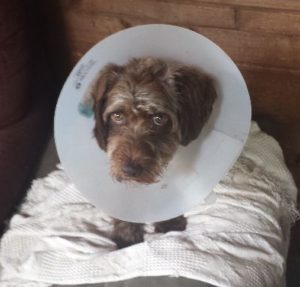 This is Molly, freshly be-coned from having been spayed yesterday. She, her little brother Wobbles, and my wife all share the bed with me. Since Wobbles is still just a little one, 11 weeks old, we close the bedroom door at night, to prevent accidents and chewing out in the rest of the house.

Sometimes when I get up Molly will come with me, other times not. If I move quickly she just stays in bed and then the door closes and she doesn’t pursue. It’s openable by her, but not readily. It’s kind of a "press-fit" and takes some effort.

The other night, I was having a particularly hard time, very dark blue.

I did the now-usual up-and-down thing several times, without Molly. I finally decided to try the deck. I curled up out on the couch and settled in to mope my sad self to sleep.

A couple of minutes later, Molly came and curled up — unusually — at my chest, where she spent the night, or at least until I slept. She had decided she would force the door, and she decided the thing to do was sleep at my side, not, as she usuallydoes, down by my feet with a foot of space between us.

So there ya go, a simple story of a boy and his dog.

There is nothing spectacular or miraculous going on here. It’s common to almost all dogs that they’ll sit quietly and nuzzle a sadowner.

This story gives me four things to marvel at:

First, I marvel at the wonder of nature. Clearly, the body of the dog — of all dogs — is made to respond to a set of clues from the bodies around it. Stuff we’re used to calling our "emotional state" is included. (I realize I’m begging the question of my materialism here, but I don’t care: I’m a strict materialist most of the time.)

Second, I marvel at my long-term and ever-growing sense that I am not in charge of me. That is, the thing-that’s-conscious is not in any easysense in control of the thing-that-acts. That’s a very long story and playsa part in how and what I coach.

Third, I marvel at the apparently naked-to-her-and-others intensity of my need. We cue the world constantly in ways we don’t understand and can’t see. Somehow I cued my need for what she did. Somehow she sensed and responded to that cue.

Finally, I marvel that I can think all these things without unweaving the rainbow of my affection for this little dog. Knowing we’re talking about things far beyond the control of either of us, believing they are physical and organic not mental and will-driven, in no way undermines our love, not one tot.